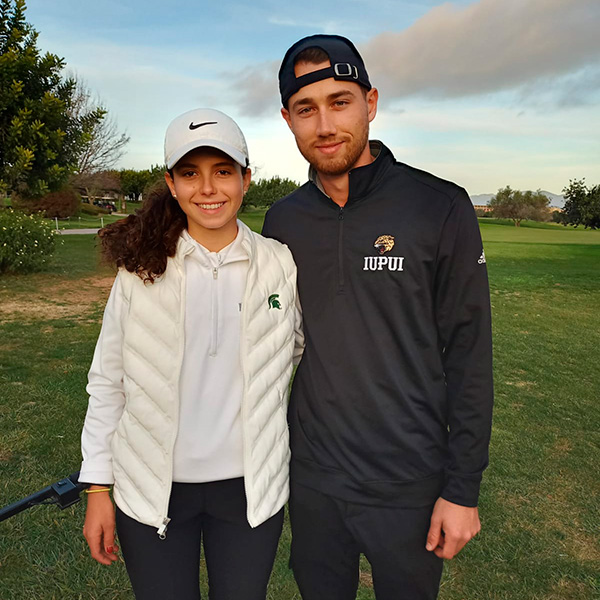 The WAGR Panoramica 2020 has been a great opportunity to recover good feelings, and above all to bring together the Barcelona Golf Academy team, including two of our most advanced pupils who are studying and playing golf at American universities, the siblings Nina and Enrico Rissi.

Both have been among the best players in the event. Nina Rissi, who studies at Michigan State University, has been included this year in the list of Women’s Golf Coaches Association (WGCA) All-American Scholars after going into action in four tournaments. In Panorámica she shined with an eagle on the 18th hole to enter the play-off for the victory, which she nearly achieved.

Enrico Rissi, from the IUPUI University of Indianapolis, has returned after a few years in the United States, where his academic development has been superb, placing himself in the Top-100 of the students of his entire University. He has finished his degree in Mechanical Engineering, and has been offered a place for the Master, due to his high qualifications.

Combining studies with sports is not easy, and in his case, he chose a team that was not very competitive, with the intention of playing golf as much as possible. But once he got going, the truth is that his golf lost its spark, which is why he has been working very hard recently to regain his level.

We can happily say that he is back on track, as seen this Summer in the 2020 Catalonia Championship, where he finished 13th. Now in Panoramica, we have seen him very close to the podium. When he was 3 under par, a couple of mistakes floored him, but then he closed with a birdie at the 18th, to finish the tournament with a fantastic 70, in fifth position, in a very satisfying performance.

Both he and his coach Carlos Vivas can be very happy, because Enrico Rissi is recovering the good level that he showed when he was a junior playing in Spain.